Oswald was “out with Bill Shelley in front”; Lovelady was ”on the steps” in front of Frazier

Oswald was “out with Bill Shelley in front”; Lovelady was ”on the steps” in front of Frazier

Oswald told Will Fritz of the Dallas PD that he was “out with Bill Shelley in front” of the TSBD. The Fritz notes were not mentioned by the Warren Commission and were hidden from the public until 1997.

If Oswald was lying to Fritz, what was his motive? After all, he already had an alibi: he was seen on the second floor 90 seconds after the shooting by TSBD manager Roy Truly and policeman Marrion Baker. He was holding a coke and not out of breath. If Oswald was not on the 6th floor, why would he not be out front watching the motorcade? And how would he know Bill Shelley was out in front unless he saw him there? https://richardcharnin.wordpress.com/2014/04/05/10137/

Deniers claim there was not enough time to alter the Altgens6 photo. That is a canard. There was a window of opportunity. http://jamesfetzer.blogspot.com/2013/09/jfk-cartha-deloach-fbi-memorandum-and.html

When Lovelady was first interviewed by the FBI, he stated that he was wearing a vertically striped shirt on Nov. 22, 1963. This conflicted with Altgens6, so he changed his testimony to more closely conform to Doorman (Oswald) by saying that he wore a long-sleeved checkered shirt.

Warren Commission testimony indicates that Oswald, Shelley, Stanton and Frazier were standing on the TOP level (first floor) of the TSBD. In the Altgens6 photo, there are three men standing on the STEPS below: Lovelady, Williams and Molina. According to Frazier, Sarah Stanton is shading her eyes on the TOP level standing to his right. He was in the Black area and not visible.

If you look close, the man standing to the left of the cutout (Lovelady) on the steps is wearing a shirt and tie. Lovelady’s shirt is obscured.

There is a clear difference betweeen the early AP (Oakland Tribune) version of Altgens6 and the later Groden version. https://docs.google.com/document/d/1bea_l1BJbWPx2Ju-QxedB3_cui6fCSFF7AE_iutBWGc/pub

Except for Doorman, the faces are all obscured. But the upper right portion of the whited-out face of the figure in front is visible and appears to match Lovelady. Was his face cut out and pasted over Doorman?

Mr. LOVELADY – That’s on the second floor; so, I started going to the domino room where I generally went in to set down and eat and nobody was there and I happened to look on the outside and Mr. Shelley was standing outside with Miss Sarah Stanton, I believe her name is, and I said, “Well, I’ll go out there and talk with them, sit down and eat my lunch out there, set on the steps,” so I went out there.
Mr. BALL – You ate your lunch on the steps? (Ball is perplexed)
Mr. LOVELADY – Yes, sir.

Mr. BALL – Were you there when the President’s motorcade went by?
Mr. LOVELADY – Right. (Once again, Lovelady does not change his location – he stayed on the STEPS).

Mr. SHELLEY – Oh, several people were out there waiting to watch the motorcade and I went out to join them.
Mr. BALL – And who was out there?
Mr. SHELLEY – Well, there was Lloyd Viles of McGraw-Hill (note: Viles said he was across the street from the TSBD), Sarah Stanton, she’s with Texas School Book, and Wesley Frazier and Billy Lovelady joined us shortly afterwards.
Mr. BALL – You were standing where?
Mr. SHELLEY – Just outside the glass doors there.
Mr. BALL – That would be on the top landing of the entrance?
Mr. SHELLEY – Yes.

1. 11/22 Dallas PD (handwritten statement and affidavit)
Lovelady was standing on the front steps.

2. 3/1/64 Warren Commission
Frazier testified that Lovelady was standing two or three steps below him. http://jfkassassination.net/russ/testimony/frazierb1.htm

MR. ALCOCK:
Q: Can you see the spot where you were situated when the presidential motorcade came by?
A:Yes,sir, I can.
Q: Will you take this symbol and place it at that location where you were standing?
Q: Mr.Frazier, do you recall who you were with during the presidential motorcade?
A: Yes, sir, I can. When I was standing there at the TOP of the stairs, I was standing there by a heavyset lady who worked up in our office, her name is Sara, I forget her last name, but she was standing right there BESIDE me when we watched the motorcade.
Q: Do you recall anyone else who may have been with you?
A: Right down in FRONT of me at the bottom of the steps my foreman Bill Shelley and Billy Lovelady were standing there.

4. 1978 HSCA interview by Moriarity and Day
Standing right on the STEPS

5. 1986 Oswald Mock trial
Gerry Spence: “You recall that 23 years later that BNL was standing in FRONT of you.About 4 steps in FRONT of you. Is that correct?”
Frazier: Yes it is..

Note: Frazier and Lovelady are consistent in stating that Lovelady was on the steps in front of Frazier who was next to Sarah Stanton. It is not clear if it was Molina or Shelley also standing on the TOP level.

In any case, the testimony is unanimous that Lovelady was standing in front on the steps. Therefore he could not have been Doorman who was standing on the first floor (the TOP level).

Sarah Stanton was interviewed by the FBI on Mar. 18, 1964. She said she was standing on the front steps of the TSBD along with Shelley, Williams, Billy Lovelady and Mrs. M.K. Sanders. She said she did not see Oswald. She could have missed him on the TOP level or was intimidated, like many others, from saying so.

Lloyd Viles of the AP was interviewed by the FBI on March 23, 1964. He said he was standing across Elm Street from the main entrance of the TSBD. Shelley had testified Viles was at the entrance to the TSBD.

Links to the Warren Commission testimony of TSBD employees are given below.

Carolyn Arnold, a secretary working for the Texas School Book Depository, provided support for Lee Harvey Oswald’s alibi. She said that he was on the first (i.e. ground) floor of the TSBD at the time of President Kennedy’s assassination. http://22november1963.org.uk/carolyn-arnold-witness-oswald

Charles Givens was not asked where he was at 12:30. Danny Arce said he was in front but “on the grass”. The others said they were inside the building on the upper floors. Jack Dougherty’s testimony is suspicious and confusing.

Doorman’s shirt was open in a V to reveal a tee shirt identical to the shirt Oswald was wearing in custody. Lovelady did not wear his shirt open in a V. Judith Baker’s pixel analysis proves Doorman’s shirt matched Oswald’s shirt, not Lovelady’s. https://richardcharnin.wordpress.com/2014/07/27/jfk-judyth-baker-pixel-analysis-of-altgens6-photo-proves-oswald-is-doorman/

Ten Reasons why Lovelady is the CUTOUT figure standing on the STEPS in FRONT of the TSBD and Oswald is Doorman on the TOP Level (the FIRST FLOOR).

Along with Judyth Baker’s pixelation analysis which proves that Doorman’s shirt matches Oswald’s and not Lovelady’s….

Was ‘Prayer Man’ Lee Harvey Oswald? http://22november1963.org.uk/oswald-on-tsbd-front-steps
Prayer Man’s location, at the top of the steps, suggests that he is unlikely to have been a passer–by. He is more likely to have been someone who worked inside the TSBD building, as were the fourteen witnesses known to have been standing in the doorway during the assassination. All of the TSBD’s white, male, manual workers, except for Oswald, were accounted for. A process of elimination indicates that Prayer Man may have been Oswald. Of the fourteen witnesses, seven women and two black men may be ruled out immediately. The remaining five white men may also be ruled out with varying degrees of certainty:

Five TSBD employees testified at the WC that they were out in front: TWO on the Top Level (first floor) and THREE on the steps in FRONT.
Bill Shelley wore a suit and tie.
Billy Lovelady did not wear a white shirt and tie.
Buell Frazier was wearing a jacket.
Joe Molina was wearing a suit and tie.
Otis Williams as Bookkeeping Supervisor would not have worn a casual shirt.

Did Officer Baker and Roy Truly encounter Oswald on the 2nd floor? http://jfkthelonegunmanmyth.blogspot.com/2013/01/the-lunchroom-encounter-that-never-was.html
Why didn’t the WC question Baker about the affidavit in which he stated that he saw a man who did not match Oswald’s appearance on the third or fourth floor walking away from the stairwell? There was no mention of encountering anyone in the 2nd floor lunchroom. http://jfk.ci.dallas.tx.us/04/0426-001.gif
TSBD manager Roy Truly said the man worked at the TSBD. According to Occhus Campbell, Vice-President of the TSBD, Oswald was seen near a small storage room on the first floor shortly after the shooting.

Proof that the AP and the FBI were actively involved in altering the Altgens6 photo is revealed in this memo: http://jamesfetzer.blogspot.com/2013/09/jfk-cartha-deloach-fbi-memorandum-and.html

Many claim that Lovelady must be Doorman because he looks like him. This is not evidence. Doorman also looks like Oswald – and Doorman’s shirt also matches Oswald’s.

– Lone nutters believe everything in the Warren report is true.
– Many conspiracy theorists do not believe the report but believe it is accurate in stating that Oswald was on the 2nd floor 90 seconds after the shooting.

Questions:
– Why is every face in Altgens6 obscured? What are the odds?
– Is Jack Ruby standing outside the TSBD obscured except for his Fedora?

Of 17 TSBD employees interviewed by the Warren Commission, 9 said the shots came from the Grassy Knoll (GK), 5 TSBD (TB), 1 Knoll and TSBD, 1 other, 1 not asked

A discussion on the Deep Politics Forum: https://deeppoliticsforum.com/forums/showthread.php?9414-TSBD-Doorway-man-Oswald-or-Lovelady/page47#.VA8Iy_BX-uY

Is this 5:9″ Oswald and 6:2″ Frazier standing to his left on the first floor? 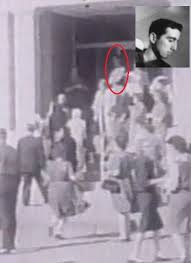 Is this Oswald standing on the first floor with Frazier and Sarah Stanton?

Posted by Richard Charnin on August 7, 2014 in JFK

4 responses to “Oswald was “out with Bill Shelley in front”; Lovelady was ”on the steps” in front of Frazier”