“Finally, almost all election ballots are counted by computers and cannot be verified by the public. Apart from being non-transparent, this method of counting ballots is also problematic because electronic voting machines can easily be hacked. Essentially, Clintonista computer hackers could have flipped a minimum number of votes spread over a maximum number of polling stations by inserting a malicious code or algorithm into the voting tabulation software. As a result, this code would allow the final number of votes to “remain random in a way that would avoid detection by election fraud analysis tools.”

Additionally, Election Justice USA found that the computer counts differed widely from the exit poll projections, but only for the Democratic Party primaries. According to election analyst Richard Charnin, Bernie Sanders’ exit poll share exceeded his recorded vote share by greater than the margin of error in 11 of 26 primaries: Alabama, Arizona, Georgia, Massachusetts, New York, Ohio, Mississippi, South Carolina, Texas, Wisconsin, and West Virginia. Charnin reported that the probability of this occurring is 1 in 77 billion, which raises the strong possibility of election fraud. Yet, almost no discrepancies were found in the data for the Republican Party primaries. This is particularly remarkable, because the exit polls were conducted on the same day, in the same precincts, with the same interviewers, and used the same methodologies for both the parties. So, this evidence suggests that the computer counts were only accurate for the Republican Party, while the computer counts for the Democratic Party primaries remain largely unverified.

The MSM just interviewed the authors of  Shattered: Inside Hillary Clinton’s Doomed Campaign on the reasons for Clinton’s loss.  I commented to Chris Mathews and Brian Williams of MSNBC as well as FOX and CBS on how MSM pollsters rigged the pre-election polls for Clinton.

FYI: Your guests may not have looked at my 2016 Election model. It was based adjustments to final pre-election polls which were biased for Clinton. The Democratic Party-ID share was overstated at the expense of Independents who went solidly for Trump. In addition, there is strong evidence that votes were stolen from Jill Stein – by Clinton.

The 2016 Model projected Trump’s 306 RECORDED EV. But he actually had approximately 351 TRUE EV after adjusting for late undecided voters. https://richardcharnin.wordpress.com/2016/11/07/2016-election-model-forecast/

Note: I exactly forecast the RECORDED EV in the last three elections: 365, 332, 306. In each case the winner did better in the True Vote than the Recorded vote.

ADJUSTED POLLS: VOTERS DECIDING BEFORE AND AFTER OCT.1

Since  exit polls are always adjusted to match the fraudulent recorded vote, assuming the shares of voters who decided after Oct.1 are essentially correct, then the shares of those who decided prior to Oct.1 must have been inflated for Clinton.

According to Real Clear Politics, Clinton led the RCP average of pre-election polls after Oct. 1 by 45.4-40.7%. The National Exit Poll indicates that Trump led voters who decided after Oct.1 by 48-40%, a 12.7% margin difference between RCP and the NEP

Posted by Richard Charnin on January 8, 2017 in Uncategorized

Why the 2016 pre-election polls, unadjusted exit polls and recorded vote are all wrong

The 2016 election was different in kind from prior elections; the Democrat was the establishment candidate. It was established beyond a reasonable doubt that the primaries were stolen from Bernie Sanders by the DNC which colluded with the media.

Some analysts claim that the 2016 unadjusted state exit polls prove that the election was rigged for Trump. But just because the polls were excellent indicators of the True Vote in the past does not prove that they were accurate in 2016.

Are we supposed to believe that the MSM would not rig the unadjusted exit polls to match the rigged  pre-election polls  to make it appear that Clinton was the winner?
https://docs.google.com/spreadsheets/d/1R9Y3ae2uyW8SUxVUnnOt9ZyvheAxa0fAhesAw_nhciM/edit#gid=0
http://www.inquisitr.com/3692040/2016-presidential-polls-hillary-clinton-donald-trump-leading-battleground-states-win-lose/

Exit pollsters at  Edison Research never reveal the location of precincts, votes and survey results. The only way to prove that the unadjusted exit polls are correct (and the published results bogus) is 1) to reveal the complete exit poll timeline and the data for all precincts polled and 2) a True Vote analysis based on historical and current independent data.

True Vote analysis indicates that Trump won the popular and electoral vote and that pre-election and exit polls were rigged for Clinton by inflating Democratic Party-ID. True Vote Models were based on a) national Gallup Party-ID voter affiliation and b) returning 2012 voters.

As usual, state and national exit polls were forced to match the recorded vote. This was the first election in which the media discussed election fraud – but avoided the obvious U.S. suspects from prior elections and the rigged voting machines, illegal and disenfranchised voters. Now that the MSM finally admits election fraud, they blame it on the Russians! And don’t report the proven fact that the primary was rigged for Clinton.

The True Vote Model analysis based on a plausible number of returning voters from the prior election  confirmed the three scenarios: https://richardcharnin.wordpress.com/2017/04/29/university-of-virginia-study-20-of-trump-voters-were-former-obama-voters/

The National Election Pool of six media giants funds exit pollster Edison Research. The published results are always forced to match the recorded vote which implies zero election fraud. But there is always election fraud.  Historically, unadjusted state and national exit polls always favored the Democratic candidate, but there was  a RED shift from the Democrat in the poll to the Republican in the recorded vote.

1 The Democrats stole the primary from Bernie
2 The GOP primary was virtually fraud-free
3 Trump won a majority of voters after Sept. 1 (48-42%) according to Nat Exit Poll
4  Jill Stein’s 6% (her best) in Humboldt, CA the only US county with Open Source voting
5 George Soros had an interest in  unverifiable Smartmatic voting machines in 16 states

6 Millions of voters were disenfranchised
7 Millions of illegals voted (see Link1, Link2)
8 The Reported Vote is never equal to the True Vote
9 The MSM shilled for Hillary although she was under criminal investigation
10 Final published exit polls are always forced to match the recorded vote 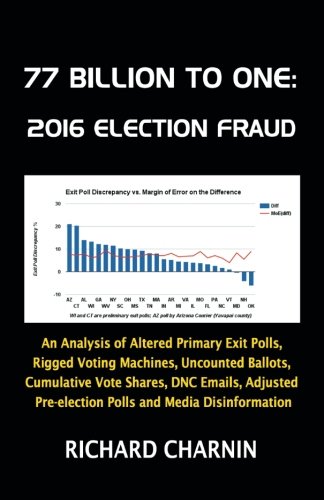