The 2016 presidential recounts: why not add these six states?

Jill Stein and Hillary Clinton seek recounts in three close states that Trump won: WI, PA, MI. This is an analysis of six states that Clinton barely won. Shouldn’t they be re-counted as well?

Exit Polls are always forced to match the Reported vote

SUMMARY COMPARISON (based on Party-ID)

This is an analysis of four election scenarios.

It is clear that the third party vote is a key factor. Jill Stein had an implausibly low 1% share. Where did her votes go?  Compare Trump’s 2.18 million True Vote margin in Scenario 1, in which third parties had 10.3%, to his negative margins in scenarios 2 and 3 where third parties had 6-7%. The differential  indicates that Stein did better than 1%. Her votes were stolen.

True Vote Sensitivity Analysis: Calculate Trump’s vote margins over a range of his shares of Republicans and Independents.

Summary Comparison (based on Party-ID)

Posted by Richard Charnin on November 23, 2016 in 2016 election, Uncategorized

Election Model vs. National Exit Poll (Party-ID):
Trump wins the EM by 1.5%.
Clinton wins the NEP by  2.1% (forced to match the recorded vote).

Posted by Richard Charnin on November 9, 2016 in 2016 election, Uncategorized

In the July 17 Ipsos poll, Independents comprised just 14% of the sample. Stein had 1%. Clinton and Trump were tied.  https://richardcharnin.wordpress.com/2016/08/07/strange-polls-jill-stein-at-1-and-just-14-of-respondents-are-independents/

Why the large discrepancies between the Ipsos poll and Gallup Party-ID survey?

The Ipsos poll also indicated a Party_ID split of  36% Democrats and  25% Republicans – an apparent contradiction to the polling sample. Assuming the other 39%  were Independents, it is a close match to the Gallup Survey.

In the primaries, Sanders won approximately 65% of Independents and 35% of Democrats. One would logically expect that Stein would do nearly as well as Sanders against Clinton in a four-way race. They are in essential agreement on major issues – and Clinton has very low approval ratings. But Stein had an implausibly low 3% on Aug. 24 and 1% on July 17.

This is not a forecast. It is a scenario analysis based on the following assumptions.

Strange polls: Jill Stein at 1% and just 14% of respondents are Independents?

Strange polls: Jill Stein at 1% and just 14% of respondents are Independents?

According to the Ipsos/Reuters poll,  only 14% of respondents were Independents and Jill Stein had just 2% of Independents. These results are implausible.

Are we expected to believe that all of Sanders’ primary voters have gone to Clinton and Trump?  http://www.ipsos-na.com/news-polls/pressrelease.aspx?id=7324

If Stein matched Sanders’  primary shares of Independents and Democrats, she could win a fair election. https://docs.google.com/spreadsheets/d/1sGxtIofohrj3POpwq-85Id2_fYKgvgoWbPZacZw0XlY/edit#gid=610570359

The 42I-28D-28R Gallup Party-ID survey equates to  60I-40D in the primaries. Using this split for the 27 adjusted exit polls, Clinton needed 83.4% of Democrats to match the recorded vote. The adjusted polls indicate that Sanders had 64.6% of Independents.

This is highly anomalous.  http://www.cnn.com/election/primaries/polls

Sanders had  52% of Independents in the 11 RED states. Clinton needed an IMPLAUSIBLE 97% of Democrats to match the recorded vote.

Posted by Richard Charnin on August 7, 2016 in 2016 election, Uncategorized

This model estimates Sanders’ True Vote. The base case estimate is that Sanders had 52% of the total vote in primaries and caucuses.

Is the exit poll shift to Clinton just pure luck? Or is something else going on?

Sensitivity analysis tables display the effects of  flipped votes and uncounted provisional ballots  over a range of assumptions.

Assuming a) 30% of California voters were disenfranchised, b) Sanders had 75% of provisional ballots, c) 10% of votes were flipped,  Sanders won CA with a 55% share.

Result:
Clinton needed an implausible 85% of Democrats to match her 53.5% share.

2014 Senate Exit Polls: Where are the minority voters?

2014 Senate Exit Polls:  Where are the Minority Vote Shares?

It is instructive to view the 2014 Senate Exit Polls in  North Carolina, Alaska and Colorado. These were close elections won by the Republicans.

In each poll, vote shares for minority voters are missing, although the percentages of the total vote are listed.  As usual, the exit polls matched the recorded vote.  But when plausible minority vote share estimates are added, the Democrat is the winner.

Just 95% of the  2783 exit poll respondents vote shares are given. The published share is a close match to the recorded vote.

Assume that Hagan won 70% of the missing Hispanics, Asians and Other voters.

Just 86% of 1,826 exit poll respondents vote shares are given. The published share is a close match to the recorded vote.

A whopping 20% of 994 exit poll respondents vote shares  were not included in the poll. Assume that Udall won 95% of the missing Blacks, and  60% of  Hispanics, Asians and Other voters.

Posted by Richard Charnin on February 1, 2016 in 2014 Elections, Uncategorized

View this summary spreadsheet analysis  of recent Governor elections in KY, MA, MD, IL, FL, WI . Using Cumulative Vote Shares, the focus is on the largest counties in which the change in vote share anomalies indicated fraud. The True Vote  is estimated  as the sum of the 10% cumulative precinct votes in TOP counties and the final votes in Other counties.

In prior CVS analyses,  changes in cumulative vote shares in the six states were calculated from the 25%  mark to the final in ALL counties. The  average 40.7% Democratic  share  in the Other small, strongly Republican  counties declined to 37.8%.

We compare the cumulative vote shares of the TOP counties of each state at the 10% mark to the final result. The 10% mark is a reasonable estimate of the true vote as it encompasses a sufficiently large number of votes in the TOP counties such that the cumulative shares will have reached a “steady state”. We would expect little or no divergence in the trend lines from the 10% mark. But the sharp divergence favoring the GOP from the 10% mark to the final is counter-intuitive and violates the Law of Large Numbers (LLN).

The probability P that 68 of 79 Top counties would move from the Democrat to the GOP is equivalent to the probability of flipping a coin 79 times and getting 68 heads.
P= 6.9E-13 or 1 in 1.4 trillion

This spreadsheet contains a complete index of links to  CVS blog posts and spreadsheets as well as related CVS/True Vote analysis for all elections.

Posted by Richard Charnin on December 4, 2015 in 2014 Elections, Uncategorized

2004 Presidential Election Fraud: Overwhelming Statistical Proof that it was Stolen

2004 Presidential Election Fraud: Overwhelming Statistical Proof that it was Stolen

The following analysis is additional confirmation that the election was stolen.

But the NEP was forced to match recorded vote by switching 471 (6.7%) of Kerry’s 7,064 respondents to Bush. The average within precinct discrepancy (WPD) was a nearly identical 6.5%. The True Vote Model indicates that Kerry had 53.6%.

There is a conflict between the unadjusted 2004 National Exit Poll in which voters were asked who they voted for (Kerry had 51.7%) and the number of returning voters in the  ‘How did you vote in 2000’ crosstab (adjusted to 43% of the 2004 electorate for Bush and 37% for Gore).

Confirmation that Kerry won easily
No matter how you slice and dice the numbers, Kerry is the clear winner:

2004 National Exit Poll Timeline
Kerry led all the way at each point in the timeline- from 8,649 to 13,660 respondents.
But the National Election Pool funds the exit pollsters. The NEP did not want the public to know that Kerry won the True Vote. So they adjusted the National Exit Poll to conform to the stolen election recorded vote. The Timeline, in conjunction with the impossible number of returning 2000 Bush voters, is a powerful confirmation that the will of the voters was compromised just like it was in 2000. Bush stole both elections.

The Washington Post displayed the 2004 National Exit Poll at 12:22am. Note that returning Nader voters (3% of the 2004 electorate) are missing in the 2000 presidential vote category. Since Kerry won at least 64% of returning Nader voters, not including them in the crosstab reduced his total vote share margin from 3.7% to 1%. Was this just an oversight?

Using the 2008 Wisconsin presidential recorded vote (a conservative assumption) as a basis for returning voters, Feingold won the True Vote  by 52.0-46.9%, a 110,000 vote margin.  McCain returning voter turnout  was assumed to be 66%, compared to just 60% for Obama voters.

In Wisconsin’s 72 counties, Feingold had 51.6% at the 10% mark confirming the True Vote Model). But his share declined to 47.1% at the final. The cumulative vote shares were counter-intuitive.

In the Top 15 counties which comprised 2/3 of the total vote, Feingold had 56.3% at the 10% mark. His share declined sharply to 48.8% at the final. The trend was not plausible. Republican shares should not increase in large Urban (Democratic) counties.

In 57 small rural counties, Feingold had 42.8% which increased slightly to 43.8% at thee final. The trend was plausible. It indicates that the GOP did not steal votes in the small counties where they dominated.

It’s common sense. The GOP knows that it must steal Democratic votes in the heavily populated counties to win elections because that’s where the votes are.

There is a positive relationship (0.31 correlation) between Feingold’s cumulative vote share at the 10% mark and county vote size.  The correlation is just 0.15 at the final recorded vote. This is  another confirmation that the recorded vote is bogus.

The sharply increasing Johnson cumulative vote share in Milwaukee and other counties defies the Law of Large Numbers.

Unadjusted exit poll are always forced to match the recorded vote. It is standard operating procedure. In order to force a match in the 2004 and 2008 presidential elections, the exit pollsters had to assume an impossible number of Bush voters returning from the previous election.

The returning voter mix should reflect the True Vote, not the recorded vote. According to the adjusted 2010 exit poll, 49% of recorded votes were cast by returning Obama 2008 voters and 43% by McCain voters. The ratio is consistent with Obama’s 7.5% national recorded vote margin. But Obama did much better than his recorded vote indicates.

There is a 97.5% probability that Obama’s true Wisconsin vote share exceeded 61%. Assuming Obama had 61%, how could Feingold have had just 47% two years later?

Note that in Oregon, Obama’s 57% recorded share was matched by Ron Wyden. Like Feingold, Wyden was a  progressive Democratic senator running for re-election.

Johnson needed an implausible 19% of Obama voters to match the recorded vote.

A comparison of  demographic changes from 2004 to 2010 yields interesting results. The 2010 numbers are suspect since they are based on the the 2010 recorded vote.

Note that the exit poll was forced, as usual,to match the recorded vote:  Johnson defeated Feingold by 52- 47%.  Feingold had an implausibly low 44% of white voters and 81% of blacks. Vote shares for Latino, Asian and Others are missing. This is a “tell”.

With these changes, Feingold is a 52-47% winner,  exactly reversing the recorded vote.

Johnson needed 70% of voters who decided in the final week to win.

Vote shares are displayed for various scenarios of a) returning Obama and McCain voter turnout and b) Feingold’s share of returning and new voters.

The True Vote Base Case analysis assumes a 1.0% annual voter mortality rate. The percentage mix of returning 2008 third-party (other) voters could not have been the 3% indicated in the WI exit poll. That would mean there were 65,000 third-party voters but there were just 44,000. Therefore, the model assigned the 1.5% excess of Other voters to New/DNV (first-time voters and others who did not vote in 2008). 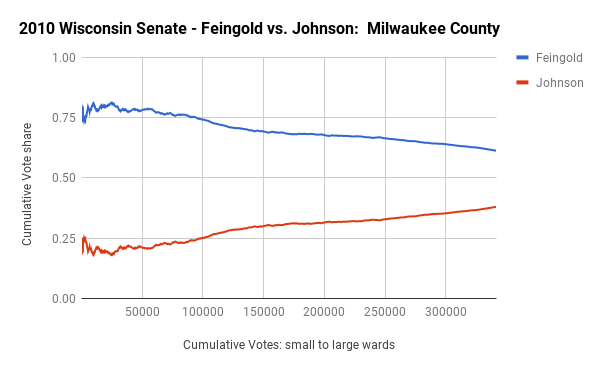 Posted by Richard Charnin on July 23, 2015 in Uncategorized